I was young, but not so young that I didn’t know what I was feeling. I loved her.

She was one of the most multidimensional people I had ever met: pure in heart, wild in imagination, quick in thought and mind. She was a popular girl, although she belonged to no clique or club; and though she was often light-hearted, sometimes sorrows fell around her face like her long blonde hair did.

We became friends simply because we sat next to each other in a sociology class where we were given assigned seats. She was unusual. For one thing, she seemed genuinely interested in the subject — which, at that age and in that place, was very strange. For another, she always smelled like flowers.

The word “love” in American English has a tremendous number of meanings. If I was to say to you that I loved her, and she came to love me, but we weren’t in love, because she didn’t love me that way and I was in love with someone else… would that make sense to you? It’s what we would have said at the time, I’m sure, and it made sense to us.

That was our final year at that school; her family had only come to town the previous year. She dated various boys in our class throughout the year; I had the same girlfriend for that entire period.

Ours was an almost instinctive fondness; I knew within minutes of meeting her that she was special, and, over time, she told me things that I wasn’t sure she ever told anyone else. However, the year wound down, and our time at that school was ending. She was moving back north.

It was the last day of the school year, and we said goodbye out on the bus ramp. We hugged each other, and found ourselves kind of hanging on for a while. We had never so much as shaken hands before that.

She was so full of dreams that some of them had spilled over into me — a virtual ocean of hopes, with several undercurrents of fear. She was about to head to a new state and a whole new chapter in her life, and I wanted, at that moment – more than anything in the world – for her to find those dreams and conquer those fears.

She looked at me as we let go of the hug, and asked, “So — do you think you two will get married?”

“I doubt it,” I said. “I have no idea what I’m doing with my life. And these sorts of things don’t seem to really work out, do they?”

“Everybody here thinks you two are the perfect couple.”

“Well, we are going to try to stay together. She’ll be in school halfway across the country, though.”

“Of course! But hell, I love you, for that matter, and no one thinks you and I will get married.”

We talked briefly about how weird the idea of class reunions seemed, then said our goodbyes, her blonde hair shining in the June sunlight, the smell of flowers only gradually fading.

Six years later, Saturday morning, winter, living in a dumpy mobile home with an old school buddy who was carrying in a case of beer and a newspaper.

“Someone from your school year died. Front page.”

A smell like flowers seemed to fill the room.

Tears coming to my eyes, I looked at that six year old photo, and it grew blurry beyond recognition. My roommate looked at me, concerned.

“I didn’t know you two were that close. I’m sorry.”

“You couldn’t have known.”

He sat down on a broken kitchenette chair and continued staring.

I had just gotten a Christmas card from her, and sent one. She was excited about life, her life, her future. I looked back at him, dazed.

I was too poor to attend her funeral, which was the following Saturday. I drove over to the old school – the place was deserted – and walked back to the ramp where we had said goodbye. It was bitterly cold; there was no snow, at least. Just an empty parking lot with a hard wind blowing.

And I felt old, but not so old that I didn’t know what I was feeling. I had loved her.

For Nano Poblano this year, I’m trying a prose post a day instead of my usual work in poetry. Thanks for reading. – S.B. 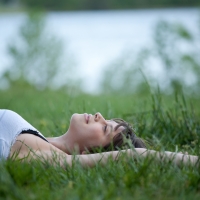